Portland, Oregon – If it was the brick house that stood strong against the big bad wolf, that’s because 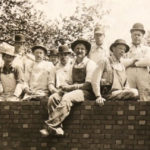 brick is built to last. So are the local unions of Bricklayers and Allied Crafts (BAC). This year marks the 125th anniversary of BAC Local 1 of Oregon and Southwest Washington.

BAC Local 1 began on May 22, 1893, when 56 members of an existing organization — the Bricklayers Benevolent and Protective Union — got a charter from a 28-year-old national union then known as the Bricklayers and Masons Union of America.

Most U.S.-based trade unions give each local affiliate a unique number. Bricklayers designates the first local in each area as Local 1, so there’s a Bricklayers Local 1 of Minnesota/North Dakota, a Local 1 of Philadelphia, and so on.

For the local that began as Local 1 Portland, it was a tough first year. A financial collapse known as the Panic of 1893 produced a severe national depression that lasted until 1897. By 1894, Local 1 had 116 members, and 100 of them were officially out of work (Actually, to the consternation of their fellow members, 23 of them were scabbing, working non-union.)

Business cycles have always been a hazard for the local, as with every construction union.

But when there was work to be had, the local set out to make it good work, at good pay. When the Local began, bricklayers were making $6 a day and working six 10-hour days a week. Over the next two decades, the union fought and won first the nine-hour work day, and then the eight-hour day.

That took strikes. Local 1’s first strike was Nov. 22, 1894 at East Side Water Plant; it failed. Many more were to follow. In May 1902 they took part in a building trades wide strike in support of millworkers. In April 1903, they backed a strike of the painters. On Jan. 3, 1907, they struck the Wells Fargo building when a nonunion apprentice showed up on the job.

In 1917, tilesetters were added to the union, and on Dec. 16 that year, union members struck the 15-story Yeon Building, which was using nonunion workers to set tile.

Over the years, the trowel trades union expanded to take in many other “allied crafts.” Today, BAC is a union of bricklayers, stone and marble masons, tilesetters, terrazzo workers, pointers/cleaners/caulkers, refractory specialists, and finishers.

In the mid-1990s, to combat the encroachment of non-union competitors, the local teamed up with union contractors to create a Market Recovery Program. Contributions of up to $2.25 an hour created a pool to subsidize bids so that quality union contractors could win the work.

Brick by brick and tile by tile, BAC 1 members have left their mark on Portland and the region. If there’s a local landmark building made of brick or with a brick facade, chances are it was union labor that laid it, from the Multnomah County Central Library to the downtown Nordstrom department store (and brick-built Pioneer Courthouse Square across the street from it) to the 15-story Portland Building where the Portlandia statue sits.

The 125 year mark arrives at a time when the local is thriving, with 648 members and full employment, new contractors signing up, and 113 apprentices entering the trade. In the last six years, overall compensation has increased $11.60 an hour, and the current contract will increase compensation another $2.75.