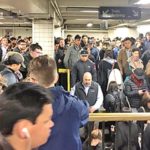 apart — we see it every day. Delays are increasingly frequent because of signal failures, electrical problems, broken down train cars, broken rails, track fires, derailments, construction “upgrades” and a myriad of other disruptions. It’s not just a question of arriving late to work, missing appointments or getting stuck in a tunnel with no light or heat. It can also be derailments, fires and other threats to life and limb.

In the past two decades daily ridership has nearly doubled to 5.7 million, while the system’s infrastructure is in some places decades beyond its life expectancy. And there are still large swathes of Brooklyn, Queens and the Bronx with no subway service.

It’s no mystery why signal problems and train equipment failures are double what they were a decade ago. The bosses of the Metropolitan Transportation Authority have skimped on maintenance on everything from tracks and train cars to signals, bridges and tunnels and cut hundreds of mechanics’ positions — during Democratic and Republican administrations alike.

Twenty years ago workers inspected signals — many installed in World War II — every 30 days. Today they are inspected every 90 days. Train cars and rails are also inspected less frequently. The number of subway maintenance workers, members of Transport Workers Union Local 100, has been cut.

The MTA used to assign workers trained in first aid to some busy stations to help in cases of medical emergency. The agency eliminated that program years ago.

The only growth in the subways is the number of cops and other armed services keeping an eye on the riders.

More than 75 percent of the 472 subway stations do not have elevators to make them accessible to people in wheelchairs or who can’t use the stairs. And 48 people were struck and killed by subway trains in 2016.

Bosses say that they had no choice but to cut back on service and maintenance, because funding from the state and the city has been frozen or reduced.

MTA isn’t a government agency. It’s run by an independent board of 14 voting members, most appointed by the governor. It gets funds from the state and city governments or by wracking up more debt. Fares only covered $8.9 billion of its $15.9 billion budget in 2016.

Many of those expenses are the result of filling the pockets of construction and related bosses with boondoggle projects and prioritizing payments to capitalist speculators who hold the system’s bonds, while skimping on maintenance and cutting customer services. Today the MTA pays some 17 percent of its budget on interest and principal. The current debt to bondholders sits at $37.9 billion and climbing — more than Iceland, Jordan, the Philippines and dozens of other countries. In the last six years alone MTA borrowed $15 billion for construction projects.

On Jan. 1, 2017, the Second Avenue subway extension — or part of it — was inaugurated, more than 40 years after construction originally started. The construction from 63rd Street to 96th Street, about two miles, cost $4.45 billion.

The three new stations cost $2.4 billion, more than the tunnels, track and everything else combined. Why? Because the two-story high stations sit on grandiose, full-length mezzanines. To build them, the tunnels themselves had to be built deeper underground — at much higher cost.

The owners of the New York Times ran an article Dec. 28 titled “The Most Expensive Mile of Subway Track on Earth.” But it tries to put the blame on what it paints as overpaid, underworked unionized construction workers, not the bosses who profited from it.

Whenever they can, bosses and the big-business press try to scapegoat subway workers for the system’s growing problems and debt.

So how does the capitalist ruling class plan to overcome the New York City subway and transportation crisis?

You guessed right. On the backs of working people.

One way to do that is with Gov. Andrew Cuomo’s push for “congestion pricing.” The “smart” cameras they’ve put up everywhere would levy a fee on anyone who drives into Manhattan — said to run $12 a pop for cars and $25 for trucks.

New chief takes aim at unions
To drive through their anti-working-class moves they’ve appointed Andy Byford, former CEO of the Toronto Transit Commission, to take over as president of MTA’s New York City Transit agency. His signal achievements in five years at the helm there: beginning the switch to one-person instead of two-person train crews and cutting unionized workers by contracting out garbage collections and other work.

The capitalist rulers in Albany and New York City hope that Byford will be the man to push through changes like this. The Times editors have called for eliminating late night subway service altogether.

On his first day on the job, Byford was asked by reporters about his plans to “fix” the system. “There’s no gain without some pain,” he said with a smile.