Marching bands, precision drill teams, and parade floats rolled through the heart of Harlem for the African American Day Parade — including thousands of union members from public sector workers to the construction trades.

“We are all in this together,” said George Gresham, president of Local 1199 SEIU, United Healthcare Workers East. Unions like Local 11999 marched up Adam Clayton Powell Blvd. Sept. 18 to show respect for their African American members and support for the larger African American community. “We participate in all the cultural parades because we have such a diverse membership,” said Gresham. 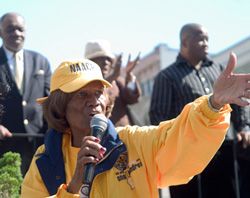 “We support all parades,” said Gina Strickland, executive board member for CWA Local 1180. Of the 9,000 members of her union, more than 1,000 are minorities and many live in the Harlem neighborhood. The wages of many Local 1180 members come back to neighborhoods like Harlem, when these workers live and pay rent and buy groceries.  “When we fight for our pensions and wages, we are fighting for these things for them.”

Community leaders returned the favor. “We stand with the unions,” said Hazel Dukes, a parade marshall and president of the New York State NAACP. “That’s the way into the middle class.”

Political leaders like City Comptroller John Liu waved to the crowds, standing next to Lillian Roberts, president of District Council 37 on her giant white and green float – the first of three floats that D.C. 37 brought to the parade. 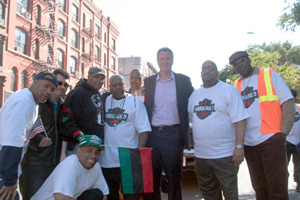 Public Advocate Bill De Blasio marched with several unions along the parade route to show his support for the African American community. “Unemployment among African American’s is near Great Depression levels,” he said. He stands with unions in their fight to bring more middle class jobs to neighborhoods like Harlem, N.Y.

Private sector unions also joined the parade, including construction unions. “There is a stigma that construction unions do not hire minorities — it’s not true,” said Gerald “Kojak” Hoskins, an African-American and a 12-year member of Laborers’ Local 79.  Hoskins works as a shop steward at the Barclay Center development in Brooklyn, N.Y., where most of the members of his crew are minority construction workers.

Many brought their children to join the celebration and show them the strength of the African American community. “I brought my two sons,” said Orrin Barfield, an African American member of the International Brotherhood of Electrical Workers, Local 3.