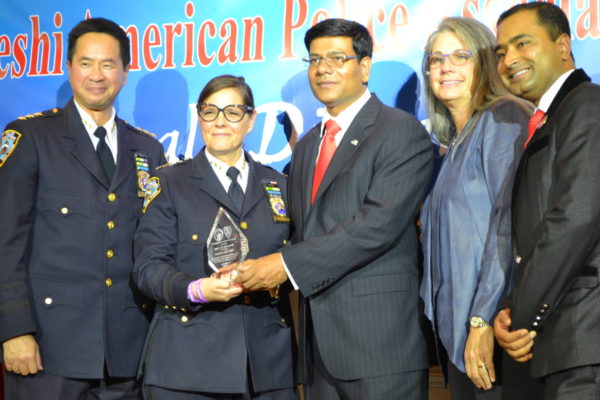 Highlights of the evening included the singing of the Bangladeshi National Anthem, beautifully sung by Anup Barua, followed by a moment of silence for fallen officers, including Detective Familia, whose children were in attendance. A video was also shown displaying the many facets of Bangladesh, including rivers, the ocean, animals, people in traditional dress, worshippers and deities.

BAPA President Shamsul Haque spoke of the term “American Dream,” coined in 1931, saying that “most of our members born in 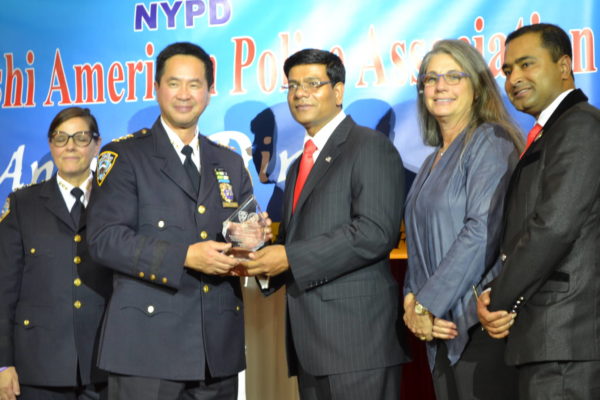 Bangladesh are living their dream through the NYPD.”  He thanked the NYPD, and others, as well as CWA Local 1182, whose President, Syed Rahim, who is of Bangladeshi heritage, was present. Haque cited Rahim as one of those whose story of success in his career was inspiring to others. Rahim had published a message in the evening’s catalogue that read: “As head of a union that works hand-in-hand with the NYPD, I know what a tremendously important job they do every day, and how important it is to know their concerns and issues, and to honor and support them. The 3,000 members of the CWA Local 1182 are Traffic Enforcement and Sanitation Agents, and a significant number of them are people of Bangladeshi heritage.”

Chief Thomas Chan accepted his award for Man of the Year, saying that BAPA reminded him of how “a handful” of Asian-American law enforcement officers had joined together in the 1980’s, and had also grown exponentially. He stressed, “The opportunity in the NYPD to rise and meet your goals is always there.” Chief Pizzuti was the keynote speaker, congratulating BAPA for “being officially recognized as a fraternal organization this summer.” She spoke of the importance of seizing opportunities, and how she and Chief Chan had not “looked like all the other Commanding Officers” when they began, “like you.” “Try to be a visionary while you are out there,” she said. Detective Familia’s children accepted her award for Heroism, Posthumously. Familia was shot and killed in July. Her daughter thanked BAPA for “helping me remember my mother as a hero, always.”