ALBANY, N.Y. – on June 14th, an important legislation aimed at helping those that participated in World 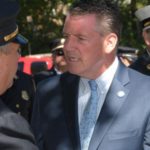 Trade Center rescue, recovery or clean-up operations, passed the Assembly. Thanks to Assemblymember Yuh-Line Niou as its main sponsor, Assembly Bill A10499 sailed through the New York State Assembly.

“The attacks on September 11, 2001 left a profound scar on Lower Manhattan and all of New York. In the weeks, months, and years after the attacks, Lower Manhattan remained hopeful, banding together to rebuild. This community has overcome one of the greatest tragedies in American history, but many of the brave individuals who helped us recover – the first responders and rescue workers — are now battling illnesses and burgeoning life-threatening diseases caused by exposure to the toxic dust and fumes at Ground Zero. Some rescue workers are also grappling with the psychological impacts such as post-traumatic stress disorder, anxiety, and depression,” said Assemblymember Yuh-Line Niou.

This bill will extend the time an individual has to file a notice of participation to begin receiving benefits to 2022. If an individual applied from the 2015-2017 period and was disallowed benefits, their claim will be reconsidered.

“This legislation, sponsored by Assemblywoman Yuh-Line Niou, will ensure that the brave responders and rescue workers will receive the care that they need,” said Charlene Obernauer, Executive Director, New York Committee for Occupational Safety and Health (NYCOSH). “Medical conditions resulting from exposure to toxins after 9/11 are continuing to emerge in this population, and extending the deadline of 9/11 heroes to apply to receive benefits is crucial.”

Those that participated in the 911 crisis are American heros.  There must not be a deadline to provide medical or emotional assistance to the brave responders.  Related health problems for the people exposed to this unprecedented disaster is continuing. Clearly, deadlines for responders to access benefits for their 9/11 mental or physical health impacts must be extended. Responders, including the cleanup workers exposed to toxins as they cleaned many of Lower Manhattan’s high rises, got the city back working again.

“Although it has been 17 years since the attacks, some rescue workers are only now feeling the effects. The onset and progression of some of the diseases resulting from exposure occur at a slower rate than others, and it is critical that we keep this in mind when it comes to policies designed to help these individuals and their families. This legislation will give rescue, recovery, and clean-up workers the opportunity to receive the benefits they deserve,” said Assemblymember Yuh-Line Niou.