In the run-up to the June 26 Democratic primary, the Asian Pacific American Labor Alliance is calling for all hands on deck to support Assemblywoman Grace Meng, running for the Sixth Congressional District in Queens. But at Tuesday’s APALA membership meeting, attended by Comptroller John Liu and Assemblywoman Meng, the upcoming election served as only the backdrop for a discussion on the Asian-American community’s weak political voice.

“Our elected officials are supposed to represent the people in their districts,” said New York Chapter President Lonway Moy. “But I don’t see it. We try to make our elected officials as conscious as possible. We work with the ones we have. But there are not very many Asian American officials within the city or the state or even nationally.”

The political influence of the Asian-American population has not kept pace with its growing presence in the city. As of 2012, thirteen percent of the city’s population and seven percent of the state population is Asian. The organization “exists to give Asian Americans a voice within the AFL-CIO as a constituency group,“ Moy said of APALA, formed 20 years ago by city workers who felt that while their unions had grown powerful, the voice of the Asian-American membership was not being heard on an organizational level. Founding unions included IBEW, UFT, and DC 37, all of which maintain a strong membership presence.

Assemblywoman Meng, who partnered with Governor Cuomo on legislation requiring state agencies to provide bilingual forms to non-native English speakers, shared personal reflections on her experience as a Chinese-American. “I’ve had people come up to me and say, ‘How did you learn to speak such good English?,'” said Meng. “Or they’ve asked, “Where are you from?’ and I’d say Queens, and then they would say, “No, but where are you really from?” Those comments are largely symbolic of attitudes that many people in America and even in New York City have.”

Meng recalled the recent suicide of teenage soldier Private Daniel Chen, a victim of racially motivated harassment and abuse while stationed in Afghanistan. “These attitudes often come to mind painfully when we hear about people like Danny Chen. And we have to remind people that we are all Americans—proud Americans who want to serve our country.” 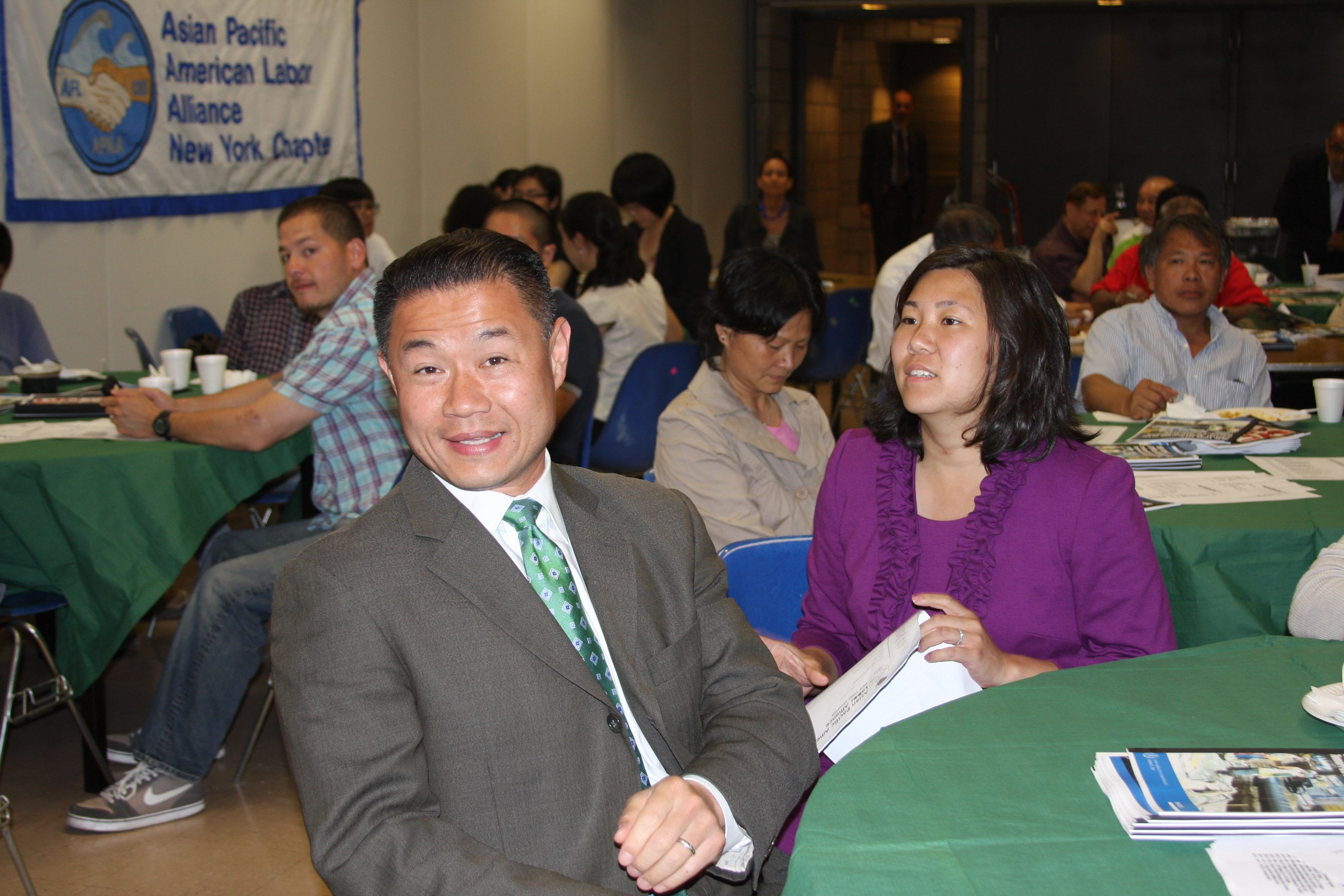 For APALA members, the most pressing labor issues mirror the challenges of city workers as a whole. “Most recently, what we’re having an issue with is Tier 6. We’ve been under siege with that. And for construction workers, they have been confronted with prevailing wage laws,” said Moy. “We have joined the mainstream workforce. Instead of the mom and pop shops that first generation works in, many of our members are skilled workers with an education. Whatever Bloomberg decides is going to be law, affects Asian-Americans.”

But while APALA members contend with the same legislation that affects the city’s workforce generally, the degree to which Asian-Americans are affected and their low level of political visibility remain problematic. “What we are looking for—most constituency groups—is to put ourselves out of business. One day, my grandson will not need a constituency organization because the banner of a union will be enough.”

“We want the Employee Free Choice Act; we want comprehensive immigration reform—not just the DREAM Act, contract neutrality, minimum wage laws, and labor laws that are not contrary to the needs of working people,“ said APALA Secretary Alex Hing. But while the talk at APALA’s membership meeting focused on specific pieces of legislation, the organization sees itself as operating within a much broader struggle to secure social justice. “There are people in the legislature that are helping us, and we’re looking to make sure they get to retire,” said Moy. “Asians by nature will go with the program. They’re not going to make a lot of waves. Because of this, we have a difficult situation.”

May is Asian Pacific-American Heritage Month, said Comptroller John Liu at the meeting. “And we’ve played a very integral part, an important part, in the labor movement. The Chinese garment workers were the first to be organized in the City of New York. And we need to keep reaching out to the Asian-American population. We’re making a huge impact because our members are growing not only in the city in terms of population numbers, but also in unions that represent hardworking New Yorkers.”

“You’re going to be exploited by people if they think they can get away with exploiting you—be it your own people, be it unscrupulous contractors,” said Moy. “If they can exploit people, they’re going to do it. So we’re trying to get more work within unions. Construction work, for example, is a gateway job to middle America. And when we organize, we are advocating for the rights of non-union workers who are Asian.”