In the nation’s capital the National Labor Relations Board (NLRB) was the focal point of a forum at AFL-CIO headquarters, a debate and vote in the House of Representatives and a vote on a proposed resolution by the NLRB’s three-member panel. The AFL-CIO forum was organized in response to the escalating attacks against the agency by the Republican Party, especially since the NLRB launched a case against Boeing to determine if the company illegally retaliated against its unionized workforce for going on strike by relocating some production from its home state of Washington to South Carolina.

According to American Rights at Work, an organization that advocates for workers’ rights via coalition-building, research and policy analysis, “In 2011 alone, anti-worker legislators have attacked the NLRB and NLRA [National Labor Relations Act] nearly 50 times” via numerous bills and amendments, hearings, threatening letters and one subpoena. 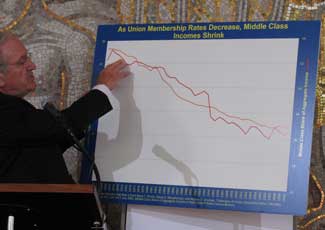 The latest bill to weaken the NLRB’s authority is the worker friendly-sounding legislation, Workforce Democracy and Fairness Act, sponsored by Congressman John Kline (R-MN), which passed the House of Representatives. Kline introduced the legislation in response to the board’s proposal earlier this summer which would “amend certain election procedures in order to reduce unnecessary litigation in disputed cases.” Kline’s bill would “amend the National Labor Relations Act with respect to representation hearings and the timing of elections of labor organizations under that Act.”

The NLRB chairman, Mark Gaston Pearce, wrote that the board’s proposal would only “apply to the minority of elections which are held up by needless litigation and disputes.” He noted that in these contested elections, “employees have to wait an average of 101 days to cast a ballot.” In contrast, the majority of NLRB-supervised elections are held “in an average of 38 days from the filing of a petition.”

One of the panelists at the AFL-CIO forum, Prof. Dorian Warren of Columbia University, said that the board’s proposal “is a modest rule change to a serious endemic problem,” referring to the “dirty tricks” management uses when they learn of a union organizing drive. “Management knows early on when unions are organizing their workforce, but they’re acting now as if the sky will fall if the proposal passes.”

Another panelist, Prof. Jack Getman, a New York native, said that opponents’ claims, like the Labor Relations Institute, that the board’s proposal is an “ambush election rule” is bullshit.

While NLRB chairman Pearce emphasized the proposal would apply only to a minority of elections, Congressman Kline said on the House floor that the board has “proposed sweeping changes to rules governing union elections. Under the board’s radical scheme, employers will have just seven days….before confronting an NLRB election official.”

Congressman George Miller (D-CA) and Senator Tom Harkin (D-IA) provided the opening remarks at the forum. Miller noted he’s seen his fair share of battles between employers and employees both making their case to the NLRB, but the attempts by Republican legislators to turn on its head workers’ rights to unionize are something that he’s not seen in his entire public life.

Congressman Miller, the Senior Democrat of the House Education and Workforce Committee, said, “The legislation the House Republicans will be voting on today is not just any piece of legislation, but a “conscious attempt to eliminate the NLRA so as to weaken the board.”

Senator Harkin, chairman of the Health, Education, Labor and Pensions Committee, said ominously, “If Taft-Hartley [the 1947 federal act that prohibits unions from engaging in jurisdictional, wildcat, solidarity and political strikes], was the first nail, the last nail is what they’re trying to do today to the NLRB.”

Harkin widened his analysis by saying that attacks on the NLRB hurt all, not just union workers. He displayed a chart showing that as union membership rates have decreased since the 1960s, middle-class incomes have shrunk. Panelist David Madland, director, American Worker Project, wrote in a report that “Unions help secure policies that support the middle class, such as Social Security, family leave and the minimum wage.” But as union density has withered to less than 12 percent of workers, “By 2010, the middle class only received 46.5 percent of income.”

Harkin told the audience before the panel discussion that, “We’ve lost many labor battles, but we can’t lose this one. We have to stop the dismantling of the NLRB.”