PASADENA, Calif.—A federal appeals court ruled Sept. 14 that the Trump administration can end temporary protected status for immigrants from El Salvador, Haiti, Nicaragua, and Sudan—possibly setting up more than 300,000 people to be deported beginning next year. 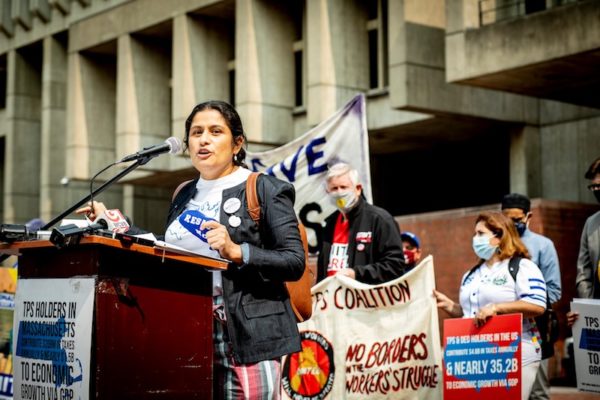 In a 2-1 decision, a three-judge panel of the Ninth Circuit Court of Appeals in California lifted a lower court’s injunction barring the administration from enforcing the end of the protected status, which is granted to immigrants from countries where conditions like war, epidemics, or natural disasters make it dangerous for them to return. Called TPS, it allows them to live and work in the U.S. legally.

Circuit Judge Consuelo M. Callahan wrote that federal law prohibits the courts from reviewing the Department of Homeland Security’s decisions about which countries qualify. She held that while the plaintiffs had shown that President Donald Trump had demonstrated racial and national-origin animus against “non-white and non-European immigrants,” and that the administration had pressured DHS to revoke the four countries’ protected status in January 2018, there was a “glaring lack of evidence” that racism was a direct reason for its decision.

Both organizers for the National TPS Alliance and a lawyer for the American Civil Liberties Union of Southern California told reporters they would ask to have the case reheard “en banc” by 11 Ninth Circuit judges. They have 45 days to request that, says Siomara Umana, a lawyer with Make the Road New York.

“We don’t want to scare the community,” she says. “There is some recourse.”

If the Ninth Circuit refuses to rehear the case, however, the federal government could end TPS 120 days later. It could then begin deporting Nicaraguans and Sudanese in March, and Salvadorans—a large majority of those affected—in November 2021. Haitians are currently protected until a second case is decided, Umana says, but would be vulnerable if that court goes against them.

“This is going to be devastating,” says Salvadoran immigrant Crisanto Andrade, speaking in Spanish through an interpreter. He emigrated from the small city of San Vicente in the early ’00s, “looking for a better future,” and now works for the Nassau County Department of Parks. Three of his five children are going to college in El Salvador, he explains, and the only way they can afford to go “is that I can support them from here.”

“This is not just about TPS beneficiaries,” says Umana. “It’s about their families.” The people affected have about 200,000 children who were born here and are thus U.S. citizens, she says.

Union leaders were quick to condemn the ruling. “President Trump’s decision to end TPS was cruel and wrong, and its harmful impact will be even greater amid this pandemic,” AFL-CIO President Richard Trumka said in a statement Sept. 14. “Today’s court ruling further destabilizes our workforce and worsens already dangerous gaps in coverage for immigrant workers in our nation’s COVID response…. Dismantling TPS is a direct attack on union members and union values.”

Kyle Bragg, president of 32BJ SEIU, said the ruling opened the prospect of deportation “for hundreds of thousands of people who have made the United States their legal home for decades.” In the meantime, he added, it “redoubles our commitment to help remove this blindly anti-immigrant and blatantly racist President from office.”

32BJ does not keep immigration-status data on its members, spokesperson Franklin Soults told LaborPress, but its leaders estimate that more than 5,000 would be at risk of being deported. The union held a rally at Boston’s Government Center Sept. 15 to protest the decision.

Both Trumka and Bragg called on Congress to pass legislation to protect TPS holders and their families.

The TPS program was established by a 1990 immigration law. TPS status lasts six to 18 months, but the designation can be renewed if conditions warrant it.  Sudanese received it in 1997 because of the civil war there, Nicaragua after a 1999 hurricane, El Salvador after earthquakes in 2001 displaced one-sixth of the population, and Haiti after the massive earthquake of 2010. They were renewed for reasons including a cholera epidemic in Haiti; famine and human-rights violations in Sudan; and poverty, lack of water and electricity, and rampant gang crime in El Salvador.

The Trump administration, however, revoked TPS status for the four countries in late 2017 and early 2018. Its rationales included that El Salvador had largely recovered from the 2001 earthquakes, and that only 2% of the 2 million Haitians left homeless by the 2010 earthquake were still living in camps.

A class-action suit challenging the revocation was filed in March 2018, with the attorneys-general of 21 states, including New York, New Jersey, and California, signing on in support. It argued that the Trump administration had violated federal administrative-procedure law by ending without any explanation the practice of considering “intervening natural disasters, conflicts, and other serious social and economic problems as relevant factors when deciding whether to continue or instead terminate a TPS designation.”

It also charged that the terminations were motivated by racial and ethnic bigotry. In October 2018, a federal district court said there was enough evidence of that to warrant an injunction, citing Trump statements like “Why are we having all these people from shithole countries come here?” and “Why do we need more Haitians?”

Judge Callahan rejected both those arguments. She wrote that the administrative-procedure law “expressly bars judicial review” of the Homeland Security Secretary’s determinations of TPS status, even if they are “arbitrary and capricious.” While the White House had “exerted pressure” on the DHS, she added, that was government business as usual, and not proof that “the President’s alleged racial animus was a motivating factor in the TPS decisions.”

In dissent, Judge Morgan Christen argued that the terminations could be challenged under procedural law, because the administration had changed its standards for TPS status “without a formal announcement to disclose its rationale for making a dramatic change to a decades-old policy.”

She cited an email exchange between United States Citizenship and Immigration Services staff and agency policy director Kathy Kovarik in the fall of 2017. After Kovarik said it was a “problem” that draft proposals appeared to lean towards renewing TPS status for El Salvador, Nicaragua, and Honduras, one staffer responded that “the basic problem is that it IS bad there [with respect to] all of the standard metrics. Our strongest argument for termination, we thought, is just that it is not bad in a way clearly linked to the initial disasters prompting the designations.”

Christen also said the lower court’s injunction barring deportations was justified under the legal principle of favoring the party which would suffer “irreparable harm” if actions are not delayed until the case was resolved.

“The district court recognized that if the subject countries’ TPS designations are terminated, over 200,000 U.S. citizen children will face the prospect of leaving the only home they have ever known, or growing up without one or both of their parents,” she wrote. “In addition, some 300,000 non-citizens face the loss of their homes, jobs, careers, and communities.”

“It’s kind of crazy for them to ask people like me to go back, after we’ve been paying taxes,” says Andrade. “My story is not the only one. There are many people who have young children, who have a house here, who have businesses here.”