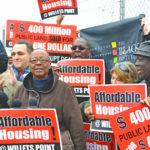 apartments on six acres of Willets Point. The new homes will be the first built on the wider Willets Point site which was approved for development by the City Council in 2008.
The new plan is for three, 100 percent affordable buildings including a standalone building with 220 homes for low-income seniors and also apartments for families at lower incomes than originally proposed. The plan also includes public open space and a new 450-seat public elementary school.

“This project delivers big on the number-one priority for people in Queens: finding an affordable place to live. It’s time to jumpstart Willets Point, and we are doing that by building more than a thousand homes for seniors and families struggling to make ends meet. I look forward to working with Borough President Katz and Council Member Moya to ensure these homes are delivered on time, and that we build even more affordable homes, schools and parks across Willets Point,” Mayor Bill de Blasio said.

“This agreement is about delivering affordable homes, and getting them built by date-certain. After years of false starts and controversies, this is a thoughtful way to get shovels in the ground, keep our promises to this community, and begin building an affordable neighborhood for seniors and working families,” said Deputy Mayor for Housing and Economic Development Alicia Glen.

This agreement provides homes for individuals earning less than $17,190, or $25,770 for a family of three. Nearly 100 apartments will be reserved for formerly homeless families and 220 for seniors. The one-million square foot project will also include a new 450-seat public elementary school, neighborhood retail and public open space. The city reiterated its commitment to pursue additional school seats should more residential units be built on the site.

“The City has immediate, desperate needs for affordable housing units and school seats, especially here in Queens. This agreement to build 100 percent affordable housing at Willets Point is the right plan at the right time. As the sponsor of the 2008 Urban Renewal Plan, I am encouraged that we are moving forward in putting a shovel in the ground, and that housing and a school are the first priorities. I look forward to working closely with the community to help steer the future of this highly coveted area to meet the needs of Queens’ growing families,” Queens Borough President Melinda Katz said.