A picket line of union dentists

A group of dentists spent their lunch hour on a picket line Feb. 27 — to let members of the public know 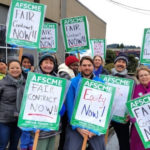 they want a fair contract.

Multnomah County, Oregon — Last spring, 28 dentists employed at seven Multnomah County clinics voted to join Oregon AFSCME after the county increased their patient load 20 percent in 2017 — to about 22 patients a day — without giving them any say in the matter, or any increase in compensation.

Union and management have been negotiating since late August, but they’ve had a hard time reaching agreement on a first contract.

Pay is a key sticking point. Oregon AFSCME rep Eben Pullman says dentists working at Multnomah County Health Department are underpaid compared to other dentists locally. The job requires a doctoral degree in dental medicine or dental surgery, but their starting pay is just over $100,000, and annual pay tops out at $161,000, compared to top pay of $220,000 for dentists at the Veterans Administration, $193,000 in the state corrections system, $175,000 at the non-profit Virginia Garcia clinic network, and $170,000 for dentists at Clackamas County.

Dentists also want a standard union grievance and arbitration process so that dentists can defend themselves in cases of discipline; county managers instead want to create a kind of disciplinary panel made up of dentists, a proposal the union thinks could be unworkable.

On Feb. 12, a delegation presented a petition to Multnomah County Chair Deborah Kafoury signed by a majority of the dentists, and explained their position to her directly.

The two sides will next meet to bargain on April 1.