A National Lesson In Unionism

Albany, NY – You can hear it building: A movement growing from a quiet whisper to a full roar.  In West 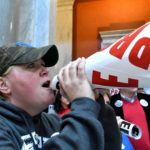 Virginia and Oklahoma – and in Kentucky and Arizona – teachers are finding their voices.

They are standing with their unions to use that collective voice to improve their lives and their communities. These teachers have had enough of working three jobs just to pay their bills.

They’ve had enough of politicians who think it’s okay to cram 40 or 45 kids into a science class.

They’ve had enough of seeing the rich get tax cuts … while their own schools get funding cuts.

They’re fed up with using 20-year-old textbooks held together with duct tape … and with classrooms that are so cold in winter, they must teach wearing gloves and coats.

Teachers are demanding respect, and they’re lacing up their walking boots to get it.

For the first time since the 1970s, a wave of teacher strikes is sweeping the nation. As president of New York’s statewide teachers union, I couldn’t be more proud.

These brave teachers are inspiring a resurgence of collective action among all working people who are hungry for real change.

As Frederick Douglas said, power cedes nothing without a demand. It never has and it never will.

This awakening – in places not known for union activism – is showing the power of unions to improve the lives of middle class workers, their families and the communities we serve.
In West Virginia, all public school teachers struck for nine days. They received an immediate 5 percent pay raise.

Oklahoma teachers took the streets to demand pay increases. They got them, too. But they remained on strike to fight even harder for their students, pressuring their legislators to approve more money for Oklahoma’s public schools.

In Arizona and Kentucky, too, teachers are fighting for their families and their public schools – and they’re winning broad public support for doing so.

Strikes by public employee unions are prohibited by law in New York. The trade-off is; that New York is a strong union state which respects collective bargaining and the voice of public employees. Teachers here in New York have a seat at the table on pay, benefits and policy issues.

It has been a struggle at times, but the presence of strong unions like NYSUT means that most teachers are paid fairly. Educators also have won good health benefits and the promise of a secure retirement after a career of service. Contract language limiting class sizes benefits students and improves conditions for teaching and learning. Money is allocated for professional development to help make our teachers the best they can be, and due process is guaranteed.

Most importantly, New York’s strong teachers’ unions give educators a voice to speak out against harmful policies – like unfair evaluations, the over-reliance on standardized testing — and for the right of parents to opt their children out of state tests.

As educators, we have the ability to use our voice, our values and our union to win a better life for ourselves and our families and to keep our public institutions strong.

NYSUT members recognize this. They understand that – because of strong state and local unions – they can speak out for themselves, their students and their professions without fear of retribution.

That strong voice is now under threat. Any day now, the U.S. Supreme Court could decide in a case backed by wealthy special interests who are trying to take away the ability of unions to fight for working people. They don’t want teachers to have a voice – or a seat at the table.

They’ve made a big mistake. The powerful statement made by teachers around the country is living proof. Whether we’re talking about West Virginia, Oklahoma – or even New York State – the message is the same: The union united, will never be defeated.