A Dazzling, Entertaining Musical Celebrating the Life and Songs of Cher

The Cher Show, at the Neil Simon Theatre, follows the career of singer Cher, a pop icon since the 1960s. 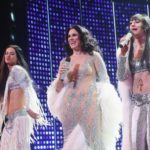 Three performers represent her at various stages of her life since then. Stephanie Block gives a Tony-worthy performance as the current Cher, channeling her unique intonation and exquisitely rendering her most popular songs.

Micaela Diamond is wonderful as Cher in the early stages of her career, and Teal Wicks is magnificent as the mid-career Cher. Block guides us through six decades of the performer’s life, leading the banter between the three Chers as they provide an enthralling and entertaining theatre experience through 35 of her hits.

The book is written by Rick Elice. As he did with the Four Seasons in Jersey Boys, he provides the narration, chronological storyline, humor, and pathos that tie this musical together.

Michael Berresse plays Bob Mackie, who for decades has designed Cher’s outrageous gowns and costumes—a bevy of eyefuls that have been recreated for this show. Jason Moore does a fine job as director, and Tony award winner Christopher Gattelli does the choreography.

From the opening song, “If I Can Turn Back Time,” to the final number, the audience is enthralled and glued to their seats—if not singing along with the most popular hits. I highly recommend The Cher Show without reservation as entertainment for the whole family.