New York, NY – The 6th Annual Heroes of Labor Awards was held on Thursday, October 5th, at the 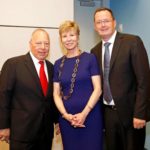 EmblemHealth Headquarters in Lower Manhattan. EmblemHealth and LaborPress are joint presenters, with the awards going to those “who go beyond the call of duty,” and “give their time and energy in an extraordinary manner to advocate for others, serve their community, and fight for what is right with compassion, strength of character and bravery.” LaborPress Publisher Neal Tepel began the evening by welcoming the crowd and thanking Shawn McLoughlin, Director of Labor, EmblemHealth, and Karen Ignagni, President and CEO, EmblemHealth. He mentioned that LaborPress is the fastest growing news network in the United States, with a reach in September of 100,000, and the news that Blue Collar Buzz, the LaborPress radio show that airs on AM 970 The Answer, will soon be syndicated. He also thanked “the many labor unions and businesses that support us.”

McLoughlin followed, thanking Tepel for the work LaborPress is doing, as well as the senior leadership at EmblemHealth and the event volunteers and coordinator. He also welcomed the elected officials in attendance “who have been coming for six years,” and the honorees, who he said “have 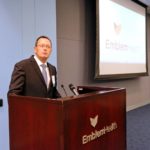 Ignagni spoke next, thanking “our partner Neal” who she called “a force of nature” as well as “all distinguished guests” and the honorees, “people who have made a difference, an extraordinary impact…who have confronted adversity and challenges,” and helped others reach the middle class. “Union officials and members,” she added, “have made it all possible. We salute you.”

Commissioner of Labor Roberta Reardon then took the podium, telling the crowd that from her beginnings as an actor, she became involved in working in labor, which led to further involvment, and 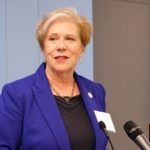 that currently, “this is the best job I ever had.” “Labor is the backbone of this State, and the economy…the Governor and I thank you.” She then spoke briefly about each of the night’s honorees, singling them out for specific achievements, finally saying, “Each and every one of you has set an example for our unions…unions raise standards for every worker in their sector and community.” She added, “You always get the job done,” and said, speaking of Governor Cuomo, “there is no governor more committed in this country to the labor movement…we will stand beside you to protect your right to collective bargaining,” which is under attack by such threats as the upcoming effort to hold a Constitutional Convention. “Together we have to stand up to these threats,” she said.

Gary LaBarbera, President, Building & Construction Trades Council, who was acting as the event’s 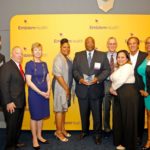 Master of Ceremonies, then introduced the first honoree, Sean Campbell, President, Teamsters Local 813. Campbell’s union represents private sanitation workers and workers in the funeral, demolition, rental car, paper and corrugated, and factory and warehouse industries, and Campbell has consistently worked on measures designed to improve the wages and conditions of his workers, and has labored to transform the practices of the commercial waste industry. A video on Campbell was shown, where he spoke of the importance of “good, strong contracts, and good wages starting out,” and said, “receiving the Heroes of Labor awards is a huge accomplishment to me,” and thanked EmblemHealth and LaborPress. Presenting his award was Neal Schelberg, Partner, Proskauer Rose LLC, who cited his “commitment to service,” and his outstanding work with workers and employers, as well as in his personal life in roles such as mentor and coach. Campbell accepted the award, saying, “Working in the Local hasn’t always been easy, but it’s always been fun…You name it, 813 is there.” 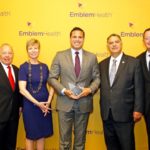 footage showed Conigliaro saying, “We’ve provided a real community for our drivers,” and singling out as a victory the “tipping campaign,” which brought the option to tip on the Uber app, which he said, “will bring nearly $300 million back to drivers’ pockets in NYC.” The presenter was his father, James Conigliaro, Sr., General VP at IAMAW,  who said, “the union puts food on the table,” and spoke of his son’s union career, beginning as a machinist, then becoming a labor lawyer and General Counsel working for his father, working on various drivers’ campaigns. The honoree accepted his award, saying how much he appreciated receiving the award from his father, joking, “obviously I wouldn’t be here without him,” and adding, “I look up to him in every way.” He thanked EmblemHealth and LaborPress, saying of the latter how much it had improved, and calling it “an amazing organization.” He spoke proudly of how his work helps the “largely immigrant” driver force. 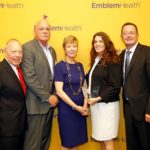 next honoree. NEW prepares, trains, and places women in careers in the skilled construction, utility, and maintenance trades. In her video, she said, “We are able to provide a real living wage and entry into the middle class…[helping workers] transform their lives and the lives of their families for generations to come.” Presenting her award was Terrence Moore, Business Manager, Metallic Lathers & Reinforcing Ironworkers Local 46, who is on the board of NEW. “I’ve watched how they’ve created something in NYC – seen the people they’ve put to work, people not in the middle class, who don’t have someone looking out for them.” Culhane accepted her award, saying, “We’ve established ourselves as a national model…there’s more to do…the tradeswomen of NYC are the real heroes…I accept this honor on their behalf.”

Daniel J. Kane, Jr., President, Teamsters Local No. 202, was next. Its members include social-service 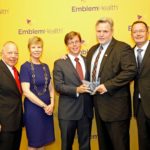 workers, ATM mechanics, and telecommunications workers, but it primarily represents workers in the food-distribution industry. Its core is the 1,500 workers at the Hunts Point Terminal Market in the Bronx, the largest produce market in the U.S., which supplies about 60% of the fresh fruit and vegetables for restaurants and grocers in the New York area. His video showed him at the Market, in what he described as a “poor district.” He said that “LaborPress and Neal Tepel have done a great service in the City by letting people express themselves.” His award was presented by Robert Carroll, New York State Assembly, District 44, who called Kane “a tenacious advocate for working men and women in the Bronx, someone who can fight back against pernicious monied interests” who are against labor. Kane said, “our stories are about the thought that regular people matter…the effort is day-to-day…many, many people fight this battle.” 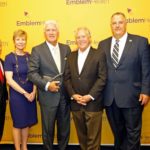 members “from Montauk to Buffalo,” saying, “old trades are our pathways to the middle class…we build these buildings in NYC and NYS [with] very talented people…and safety is so important.” Presenting was Denis Hughes, Former President of NYS AFL-CIO, who said, “Today it is very important to have very very strong and capable leadership.” He called Cahill, “active, aggressive, political, yet non-partisan,” someone who can exert pressure, “yet knows how to compromise…leadership that has the confidence of their members.” Cahill, accepting the award, reiterated the importance of safety, saying it was “near and dear to my heart,” and that all must “return home to family every day, safe and sound.” “I have almost 50 years in the movement and I would never trade a minute of it,” he added.