The contract agreement between SEIU 32BJ and the commercial real estate industry will expire in 17 days, and if an agreement isn’t reached, the union that represents 22,000 doormen, porters and cleaners will go on strike. The Realty Advisory Board (RAB), the industry’s multi-employer association, will be distributing strike preparedness manuals to its members at a meeting next week. The union is preparing too, as it organized a 10,000-strong march and rally on December 14 in Midtown.

Kyle Bragg, SEIU 32BJ’s Vice President, said the march was “planned a while ago in anticipation that we wouldn’t be moving in the right direction of our bargaining.” The membership voted on December 1 to authorize the union’s bargaining committee to call a strike because the RAB submitted “aggressive proposals our members didn’t like,” said Mike Fishman, SEIU 32BJ’s President. 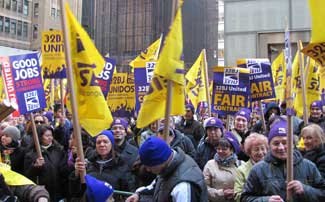 According to both Bragg and Fishman, the board is asking for givebacks that will, for one, drive a wedge between current workers and new hires. Office cleaners now earn about $22.65 an hour, or $47,000 annually. Nevertheless, the board is demanding a two-tier wage structure which will make it even harder for union members to live and raise a family in New York.

Fishman noted that the jobs in the commercial real estate sector represent a ladder to the middle class for the diverse 32BJ members who hail from 64 different countries. “These jobs are incredibly important to the people who come here from elsewhere to make a decent living, so you have to pay people a decent wage. But they [RAB] want to bring it down to poverty-level wages by saying that’s what everybody else is paying.”

Fishman mentioned that the City’s commercial real estate is doing well, which is good reason for the building owners to pay wages that keep pace with the cost of living. “New York is now the number one city for real estate in the world.”

But Howard Rothschild, President of the RAB on Labor Relations, said in a written statement in response to yesterday’s rally that, “……operating costs are up, commercial property taxes are up and rent revenues are down dramatically since the last contract was negotiated in 2007. That contract provided generous increases in wages and benefits of more than 16.5%.”

Fishman said the bargaining committee will meet with the RAB tomorrow and next week, while Bragg noted that unless there’s some serious movement [from management] in the next coming weeks, then it [a strike] is imminent.”

Other unions showed their support for 32BJ by participating in the rally, including TWU Local 100, which will hold a rally tomorrow as contract talks with the MTA occur at 2 Broadway, UFCW 1500, Professional Staff Congress-CUNY and CWA.

Pete Sikora, CWA’s NY State Legislative and Political Director, said negotiations with Verizon continue, although members returned to work in August under an agreement that extends the current contract. On job security, Verizon wants to ship more jobs overseas and expand contracting to lower-wage, non-union employers. The company is also demanding that each worker pay thousands of dollars more for health care coverage. Verizon wants to eliminate all pensions going forward and take away all paid sick days for new workers and cut them dramatically for current workers.

“These are very, very serious issues. They want to destroy the union and middle class jobs,” said Sikora.