SEIU 32BJ won a major contract victory with the Realty Advisory Board in December 2011, but there are still hundreds of thousands of workers who do the same work that many 32BJ members do but work as non-union. On Monday, March 19, the union kicked off an organizing brigade for 75 members who have two months to learn the leadership skills required to organize other workers.

Many of the participants in the brigade are new leaders who rose through the ranks in the recently-won commercial contract campaign fight. It’ll be their first experience going out into the field to explain to non-union workers the value of joining a union. According to the union, the brigade, expected to grow to 100, is the largest 32BJ has ever assembled. They will be participating in campaigns in the security, airport and residential sectors in New York, New Jersey, Washington, D.C., Philadelphia and Miami, Florida.

Kevin Doyle, 32BJ’s Vice President, was the first to welcome the members, who hail from New York and as far south as Miami, FL. He told the soon-to-be-organizers that after the commercial contracts’ victory last year, thanks in part to the leadership qualities members exhibited during the negotiations with commercial builders, the union needed a program to continue the momentum. 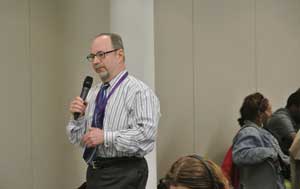 Doyle explained candidly the reason why the union needs to form a 100-member organizing brigade. “We have to fight back against the forces that are arrayed against unions or opposed to any other vehicle that working people depend on to secure their economic future.”

“We have airport workers who are expected to keep our airports secure, but are earning only $8 an hour and have to sleep in a homeless shelter because they can’t pay rent or a mortgage. That’s just not right.”

Mike Fishman, 32BJ’s President, also addressed the new organizing brigade by telling them how he got his start in union organizing. He was working as a carpenter in the early 1970s when he started to organize other carpenters for better wages, eventually winning a prevailing wage of $9 an hour in 1973.

“Union workers can earn a lot more for their work, but we need every single security officer, every building cleaner and every airport worker,” Fishman said. 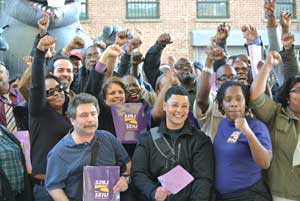 Fishman stressed the important role the new organizing brigade will play in expanding the union’s membership by 10,000 by the end of the year. “In 1999, the union had 43,000 members. Today, we have 120,000 members. We used to have 1,000 security officers as members. Now we have 13,000 security officers working in office buildings, schools, government buildings and other sites.”

He added, “Together, we can do extraordinary things—that is what’s amazing about the union.”

Fishman told LaborPress that the focus of the union’s organizing efforts this year will be security officers and airport workers. “The organizing brigades are enormously important because they are the most effective way to reach out to other workers. We envision our 120,000 members reaching out to tens, hundreds of thousands of non-union workers and talking with them about the value of union representation in raising working and pay standards.”

He also noted, “We are taking the time to invest in these new leaders’ skills, knowledge and experience in order to strengthen the movement to fight income inequality as a whole.”

According to the union, the average hourly wage for a 32BJ security officer is $13.92 an hour, or approximately $27,000, with most receiving employer-paid health care.

The 75 members concluded their organizing orientation by protesting in front of 505 West 37th Street, a residential building owned by TF Cornerstone, a real estate acquisition, development, construction and management firm that owns over 8 million square feet of office and residential space in the City and Washington, D.C.

In November, 2011 the union reached a settlement agreement with Cornerstone to settle charges of illegal threats, surveillance, polling and increased workloads that took place at West 37th Street, which was approved by a regional director of the National Labor Relations Board.

Joe Eisman, a 32BJ organizing coordinator, said that Cornerstone is one of the most rapidly growing real estate developers in the City, especially in Long Island City where it plans to complete seven residential towers by 2013.

“The average price for a two-bedroom Cornerstone unit per month is about $5,040,” said Eisman, which ostensibly should give Cornerstone the financial wherewithal to provide industry-standard retirement, training and other benefits. Instead, the company has resorted to threats and intimidation to prevent workers from organizing.

Danny Carranza, who’s been working at the West 37th building since it opened two years ago and is one of 25 workers at the building, continues to participate in efforts to organizing his site despite obstacles placed in his way by his employers. Securing training and advancement opportunities, as well as adequate retirement benefits, is important to many Cornerstone workers. Workers working at unionized buildings often have access to courses where a porter could train to become a handyman or superintendent. However, there is little chance for advancement at Cornerstone.