An unusually large lobby day organized by most of the unions representing MTA workers brought 2,500 transit workers to Albany to hear and lobby representatives on both sides of the aisle. Taking the lead was the MTA’s largest union, TWU Local 100, whose President, John Samuelsen, played host to a crowd that filled the capitol’s fourth floor Hart Theater in The Egg. Alongside Samuelsen were other top Local 100 officials as well as the Presidents of major ATU, TWU, UTU, Teamster, and Bridge and Tunnel locals representing MTA employees.

Addressing the union and showing support were public officials including State Controller Tom DiNapoli, Assemblyman James Brennan, the new chair of the Committee on Corporations, Authorities, and Commissions, which has oversight on the MTA, and State Senator Marty Golden, who along with Brennan has sponsored a transit “lock box” bill in the legislature. A dozen other legislators from New York City also played to the home town crowd. Assemblyman Peter Abbate, introduced by Samuelsen as the man the New York Post called, “labor’s poodle,” relished the title but said he’s more like labor’s bulldog. A chorus of barks from the audience cemented his reputation.

Giving the event added urgency is the push to privatize bus routes operated by Long Island Bus, where members of TWU Local 252 work. Local 252 President Pat Bowden spoke about the dire situation, saying that every union member’s help is needed to fight back against the cuts. ATU Local 726 President Angelo Tanzi, Local 1056 President Daneek Miller, and Teamsters Local 808 President Chris Silvera were also among those rallying the troops. Hundreds of ATU members and dozens of Local 252 members, all wearing t-shirts sat with an estimated 1,500 TWU Local 100 rank and file. MTA Chairman Jay Walder was called out a number of times, with one union leader saying he’s taking up a collection to buy him a plane ticket back to London. Walder, a gubernatorial appointee, has not called on the State of New York to give more money to the MTA. 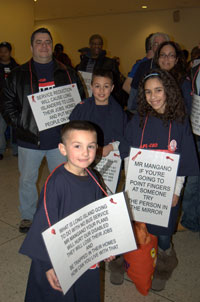 The big lobby day was the first official outing of the MTA Labor Coalition, a group of MTA unions that has been brought back to life by this year’s budget crisis, in which the MTA faces a shortfall of as much as $170 million a cut that would mean another round of service cuts and possible layoffs. Local 100 published a four-page insert in Albany’s Legislative Gazette, arguing that if these cuts go into effect it means a return to the 70’s and 80’s in New York City’s subway system, when trains often derailed and transit schedules were unreliable. The union suggested a “lock box” to keep transit funding dedicated to transit and not available for other budget needs, along with an extension of the “millionaire’s tax,” a cause that has universal support throughout New York labor.

After the speeches in the Hart Theater, transit workers fanned out to meet representatives and push their respective union’s agenda items. One visit to the office of Assemblyman Darryl Towns found 20 TWU Local 100 members from his district urging him to commit to the lock box legislation. Towns, who is leaving office to become the Governor’s new housing czar, said he’d recommend to his successor in office transit’s agenda. He spoke of the need to consider tolling East River bridges as well as congestion pricing, but faced https://www.laborpress.org/images/stories/MunicipalGovernment/samualsenrally.jpg some resistance from union members who said they lived outside of the city and didn’t want to pay more to get to work.