$15 An Hour Minimum Wage in NJ 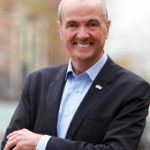 This is a vision realized for New Jersey’s working poor and the advocates that have fought for years on their behalf. Together with our affiliated unions, community partners and labor legislators, workers now have the opportunity to realize a decent standard of living.

Progressive initiatives such as raising the minimum wage have been a long time priority for the New Jersey State AFL-CIO.  We couldn’t be more proud of Governor Murphy, Senate President Sweeney and Speaker Coughlin, organized labor and progressive activists for their persistence and dedication.

The New Jersey State AFL-CIO thanks its affiliated unions, the legislators that voted in favor of this policy, labor candidates, and coalition partners in the “We Are One” coalition for spearheading the fight for the $15 an hour minimum wage.  Without their advocacy we would not have achieved this victory for the working poor of New Jersey.