104 Traffic Enforcement Agents Upgraded from Level I to Level II 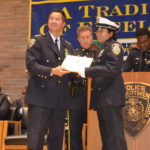 Level I to Level II on Monday, September 25th, at 1 Police Plaza in downtown Manhattan. With family members and friends present, and the lively strains of the NYPD Jazz Band as serenade, the fresh graduates received certificates and are now certified to write tickets, as well as to direct traffic. Level II TEA’s must be on the job for at least one year before promotion, to complete their probationary period.The ceremony began with a video dedicated to showcasing TEA’s on the job, “facilitating the flow” and calling them, “dedicated, trained, and professional.” The dramatic footage showed the workers in their daily duties, as well as at emergency sites, where they are often called to serve. The TEA’s work in all weathers, from freezing snow to the blazing hot sun, and face potentially dangerous confrontations daily. It was followed by a segment on NYPD Police Officers, as TEA’s are part of the NYPD. The officers were heralded as being “heroes, always heroes,” and were shown on the ground, the air, and in the water, performing their dangerous and difficult jobs.

Master of Ceremonies Lieutenant Jamel Hodges then spoke, welcoming the graduates on behalf of Police 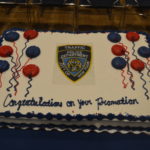 Commissioner James P. O’Neill. All stood as the National Anthem was then sung by P.O. Kenneth Rivera of the 52nd Precinct. Next, an invocation was delivered by Fr. George Anastasiou, Chaplain, NYC Police Department. He said, “Heavenly father, we offer to you our thanks for bringing us to celebrate this upgrade…we thank you for their service, for keeping them safe on and off duty, which many times becomes perilous indeed.”

Officials gathered onstage were introduced, including Local 1182 President Syed Rahim, and Thomas M. Chan, Chief of Transportation, spoke, saying, “You should be very proud of what 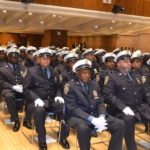 you’ve accomplished today…the end of your probationary period. Your dedication and perseverance is finally being rewarded. We look forward to seeing all of you out there. You will continue to protect pedestrians, and motorists, and work hand in hand with our police officers. You’ll see parades, demonstrations, and street fairs…your efforts will sometimes seem mundane, other times they will be of international consequence, such as during Presidential, heads of state, or dignitaries’ visits…We will keep our title of being the safest big city in the country.” He also spoke about Vision Zero, saying that traffic fatalities were down more than 10%, and that all were working to completely eliminate them. “By working together, we serve safer.” “You are all invaluable,” he added. “Congratulations to each and every one of you. You’ve earned it.”

Chan then presented the framed certificates to each graduate in turn as they mounted the stage, and Rahim shook each one’s hand in congratulations. A benediction was offered by Fr. Anastasiou, who said, “We give to Your care and Your providence and Your protection all of our graduates and their families.”

The ceremony concluded with the singing of “God Bless America” by Rivera. The happy graduates then enjoyed a special cake and posed with their loved ones for pictures.